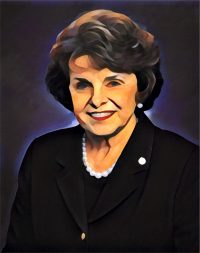 Emerging onto the national scene as a tough on crime, but fiercely pro-choice and pro-gun control, Sen. Feinstein has served in the U.S. Senate since 1993. Over the decades she has developed a reputation as an ideologically unpredictable consensus-builder and a pragmatist—someone willing to cut deals and occasionally vote against her party, particularly on national security issues. If re-elected, she would likely become California’s longest serving senator.

The daughter of a renowned surgeon at UC San Francisco, she got her start in politics as a on the state women’s parole board before becoming a San Francisco supervisor and then the city’s first woman mayor. Her politics are informed by her biography: When San Francisco Supervisor Harvey Milk and Mayor George Moscone were shot and killed at City Hall in 1978, it was Feinstein who found them and announced the news to the world.

The Resume of Dianne Feinstein

How the U.S. Senate candidates are polling

Gun violence has defined Sen. Dianne Feinstein's career. The issue is more important than ever for her now

by Editorial Board, The San Francisco Chronicle

An interview with Dianne Feinstein

More boos for Dianne Feinstein from California’s left – do they signal 2018 trouble?

by Angela Hart, The Sacramento Bee

The Lioness in Winter