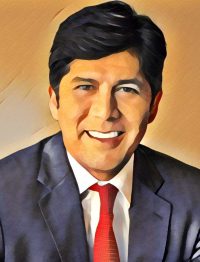 De León wants to represent the new face of California: multiracial, the child of immigrants, and offering an uncompromising brand of progressive politics. His views on immigration, healthcare, and the environment are ambitious and absolute. In the age of Donald Trump, de León is the candidate who champions resistance.

He grew up in San Diego, raised by a single mother—an undocumented immigrant from Guatemala who cleaned homes for a living. He is the first in his family to graduate from high school or college. Before joining the California Assembly, de León’s work history traces the ideological foundation of the modern Democratic Party in California: He taught English to immigrants; campaigned against Proposition 187, which would have denied public services to undocumented immigrants; and worked as a union organizer for the teachers’ union.

The Resume of Kevin de León

“The days of Democrats biding our time, biting our tongue, and triangulating at the margins are over.”
Kevin de León

How the U.S. Senate candidates are polling

A disrupter from day one: How Kevin de León became the Democrat trying to topple Dianne Feinstein

The Former College Dropout Who Would Be Dianne Feinstein

An interview with Kevin de León